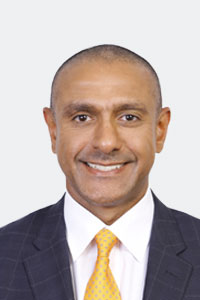 Sami’s career commenced in Australia over 25 years ago when he completed his Chartered Accounting Qualification with Price Waterhouse.

At 24, he was a controller for a US$300m business with Schlumberger in West Africa. By 31, he was CFO for a US$3.5b Saudi Sheikh’s conglomerate in the Kingdom of Saudi Arabia, UK and UAE and by 40 was COO for a business in Mexico responsible for 12,000 staff and agents. He was also an investor and CEO for Australia’s fastest growing fintech company which won several innovation and advertising awards and successfully exited 4 years later.

Sami’s career has taken him from working in Angola in the middle of the civil war, to living on an offshore oil rig off the coast of Congo and living and working in Dubai, Jeddah, Milan, London, Prague, Brisbane, and the Gold Coast. He also spent 3 years in Puebla, Mexico, running the operations of a UK listed finance company.

He has worked in industries ranging from professional services (PwC), oil &amp; gas (Schlumberger), financial services (IPF) to fintech (Nimble) and real estate development (SAB Development Services). He has always had an interest in technology, so alongside his Chartered Accountant qualification, he also has a master’s degree in information technology.

In 2016, he created a development company in London for an UHNW family and worked as a development manager and client representative on some of London’s finest homes with GDV more than £140m. He also worked in a UHNW private family office setting up structures that support tax optimization, succession planning and privacy.

He has successfully led several M&A transactions and raised both debt and equity financing throughout his career of over £1.5b. He has also held several Board positions in the real estate development and construction sector in the UK.

His passion lies in building high performance teams and mentoring the next generation of successful business leaders.